Read Why Labour Want To Shut Him Up 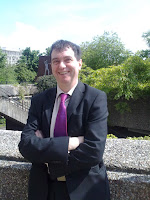 Reading's Labour Group would really like Cllr Warren Swaine to shut up.  Why?  Because Warren keeps on embarrassing them.  His latest post is well worth a read.

Do not dismiss Warren and what he digs up: Labour certainly doesn't.  Time after time they've made complaints about him and tried to discredit him.  More fool them.
Posted by Isobel Ballsdon at Monday, July 25, 2011

's Labour administration has once again displayed its lack of financial responsibility.  Labour, with no strings attached, has given Reading Council for Racial Equality (RCRE) a further £60,000 funding. 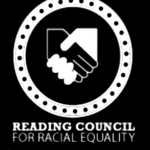 To give you a bit of background, I'd like to take you back to January. I've attended the Holocaust Memorial Ceremony in for the last few years. I believe for mankind to try to avoid repeating the unspeakable atrocities committed by the Nazis against the Jewish population, it is crucial to acknowledge and remember the Holocaust.

I've close links, both through an inter-generational friendship dating before World War II; and also with two wonderful Jewish men for whom I once worked.

As usual I went to this year's Memorial ceremony. As you may imagine, they are solemn affairs, often with a survivor recounting his or her story. Prayers are said, candles are lit, the community grieves and remembers together.

RCRE (the organisers) this year turned the evening into a political opportunity. They launched an attack against the Coalition administration. Why?  Because they didn’t want to have to justify where they would spend their RBC grant money (in line with every other charity).

Though I’m tian I was disgusted, furious and upset how RCRE abused and hijacked the event.  As I’m not Jewish I felt I couldn’t create a bigger scene by walking out, though desperately I wanted to.  I took my lead from the Rabbi and since he stood firm, so did I.  After all, the event, fundamentally, was for the Jewish community.

To come back to this week, news reaches me that RCRE has been ordered to pay a former employee over £3,100 for unlawful deduction from his wages and breach of contract, plus a further £570 in compensation for unfair dismissal.  The Tribunal’s 16 page judgement stated Mr Sohpal’s evidence and that of his witnesses, especially Mr Elahi (both of RCRE), was not accepted: A damning indictment of RCRE staff's conduct.

As my colleague Cllr Richard Willis has stated, it is ironic that one of the services RCRE offers is to help with employment tribunal hearings.  RCRE’s track record does make me question whether they are fit for purpose.  By extension, I question what on earth Reading Labour thinks they are doing giving £60,000 of council tax payers’ money to such an organisation – no questions asked.
Posted by Isobel Ballsdon at Wednesday, July 13, 2011

At a Council meeting back in June 2008 I asked for a breakdown of S106 receipts by Ward and intended purpose for the 3 previous years:  I was given just the amounts (which turned out to have mistakes). 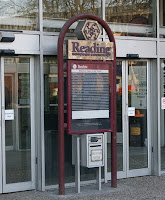 I, and other Conservative colleagues, continued asking for information on how S106 monies were spent.  What little information we got back was always very much delayed. [From our time in control of RBC, we discovered that officer answers could be delayed by Lead Members]
A Section 106 is a legal agreement.  It is entered into between the developer and RBC, and both parties have to abide by it.  However RBC did not have one single system to track and monitor S106 monies until our coalition with the Lib Dems came into power last year.

Before May 2010 nobody knows if, or how much, S106 money due for payment was left unclaimed by RBC because of the lack of a proper audit trail or triggers in place to prompt officers to chase developers at the appropriate time.  Conversely RBC's shambolic record-keeping has left the authority open to potential legal challenge from developers.

Why has RBC not published Wokingham's findings in full?  The problems happened under the pre-May 2010 Labour administration.  Even though an internal RBC audit in 2008 (finalised in 2009) highlighted the serious lack of a proper accounting system for S106's, necessary remedial action did not kick in until the Conservative-led coalition took control.

I've read and got both of Wokingham's independent reports (carried out earlier this year on the request of the Conservative-led administration) but because I was given them on a confidential basis by the Chief Executive, I'm prevented from revealing their contents.  Worryingly, the second "legally privileged" Wokingham report was not provided to last week's Audit & Governance Committee panel even though the first report was (albeit on 'blue' confidential paper).  If the second hadn't become available before Labour regained control of RBC, I very much doubt I would ever have known of its existence.  So much for Reading Labour's pre-election statements about their new-found desire for transparency!

One question posed by members of the public today has been "surely all councillors have a responsibility to ensure RBC's accounts are in order".  Well yes we do: however when procedures are disregarded, ie Decision Book Reports are completely ignored even though they have been agreed, opposition councillors effectively are rendered impotent.

A second question has been "why wasn't the local coalition able to bring the S106 debacle into the public sphere when in control?"  The answer is we tried extremely hard to be able to do so, though were unable to for a number of reasons.  Our aim has always been to open up the system to public scrutiny as soon as possible whilst at the same time minimising the risk to Council Tax payers.  We sought independent legal advice (through Wokingham's investigation) so that we had a better idea of where the Council stood.  We acknowledged that monies might have to be paid back but our coalition agreed it was imperative to clean up the previous administration's mess and create a robust & transparent system.

It is a great shame the current administration has not recognised the need for calling the District Auditor in.  I do hope Labour will think again rather than just burying their heads in the sand whilst continuing to trivialise this serious issue.
Posted by Isobel Ballsdon at Wednesday, July 06, 2011

Aung San Suu Kyi: A Heroine of Our Time 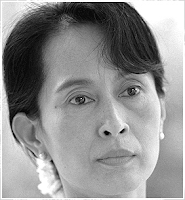 Aung San Suu Kyi, pro-democracy leader of the National League for Democracy (NLD) party in Burma, is an inspiration to the world.  Her slender physique belies her sheer courage and determination.

She is symbolic of Burma's struggle against the repressive military dictatorship that holds over 2,100 political prisoners without trial in the country.  Her father, Burma's independence leader Aung San, was assassinated when she was just 2.

She has spent more than 15 years in detention, much of which was under house arrest.  When her husband, Michael Aris, was dying from cancer in London, the Burmese dictatorship refused him permission to visit her in Burma.  Instead of risking being barred re-entry back into Burma she made the decision to stay, so did not see Michael before he died.  She has long campaigned for people to "please use your liberty to promote ours"

Do make the time to listen to her two talks about freedom on BBC Radio 4.  You will find few people able to speak so eloquently and knowledgeably: The Reith Lectures Securing Freedom I and Securing Freedom II.
Posted by Isobel Ballsdon at Tuesday, July 05, 2011

At Thursday night's inaugural meeting of RBC's Audit & Governance Committee the subject of developer contributions - Section 106 monies (S106's) - was discussed.  However I was, and still am, constrained from revealing details of the independent reports carried out earlier this year by Wokingham Borough Council officers into Reading's management of S106's because of legal privilege.  Only an edited, shortened & diluted version of one of the reports has been published by the Labour administration.


"there is no coherent specific control system to support the identification, recording, receipt and spending of monies and the reconciliation of it to Council financial systems."

You may well ask yourself why on earth the authority did diddly-squat to sort the situation out back then...

On Thursday I asked for Wokingham's investigation reports to be published.  Also I, supported by the Lib Dem's Cllr Daisy Benson, asked for the District Auditor to be invited in to carry out a further investigation to more thoroughly probe into the pre-May 2010 Labour administration's 'management' of S106 monies. However Committee member & Leader of the Council, Cllr Jo Lovelock, was dismissive.

I remain concerned that the salient facts are being suppressed from public scrutiny.  Ask yourself this question:  If Wokingham's investigation had failed to throw up any damning evidence, would Reading's Labour administration have had any problem with publishing Wokingham's results in full?

As I said at the meeting, I want this S106 debacle cleared up once and for all.  In my opinion this can only be achieved by having a further, more comprehensive investigation by an independent body: hence my call for the District Auditor to be brought in.  The published extract from Wokingham's limited terms of reference investigation does not provide sufficient information for councillors - let alone members of the public - to even scratch through the surface and see what has been going on.
Posted by Isobel Ballsdon at Saturday, July 02, 2011