Over recent months, due to the reduced area of Mapledurham Playing Fields being open to the public - as well as the heavy rainfall - areas of high footfall have become very muddy. This has led to a couple of falls on the slippery surface which is putting residents off from walking here. 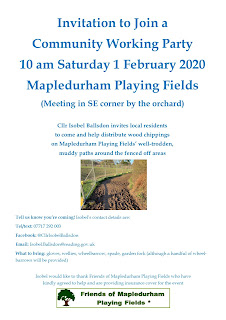 To date, although I've managed to get Reading Borough Council to put down a large amount of wood chippings, due to access problems and the very wet/soft ground conditions, the council have been unable to get a vehicle onto the fields to deliver and cover the remaining muddy areas.

I'd hoped the council were going to be able to do some today, but since they weren't, I've organised tomorrow's event, hence apologies for the short notice. Please see the poster to the right-hand side for details which you can download here.

If you are able and willing, do come along and help. It will be great to get the job done!

A Chazey Road family are donating wood chippings they no longer need which is fantastic, especially since the council's supply has run out.

The Friends of Mapledurham Playing Fields are supporting and also kindly insuring the event, which has enabled council officers to give me the go ahead.

Thanks to everyone who is helping make this happen.

Temporary reinstatement by A4074 junction with Shepherds Lane

This morning, following my calls for action, council workers filled in the trench adjacent to Upper Woodcote Road's junction with Shepherds Lane (see before and after photos)

Not only had the red plastic fencing at the junction been causing visibility problems for motorists, but also it had been blocking the pavement.

Poor drainage at the junction had been the reason for the works. The pipes that should be draining the rainwater away from the road are not connected and the road therefore will have to be dug up to sort out the issue.

I was informed that these works will be timed to coincide with the next half term to minimise disruption. Traffic management will have to be put in place.

In the meantime I'm afraid whenever it rains the water is bound to keep on creating a big puddle, so do drive with care.
Posted by Isobel Ballsdon at Tuesday, January 28, 2020

Got any questions you'd like me to put to council officers or Kier's representative about Mapledurham Playing Fields and the school's construction?

As regular readers will be aware, I'm chairman of the Mapledurham Playing Fields Management Committee. Its remit is restricted to exercising a general supervision over the day-to-day activities at the playing fields to ensure that this is consistent with the objectives of the Trust.

As pre-commencement works are in full swing for The Heights, I've invited along a representative from Kier (who are constructing the primary school) to the forthcoming meeting in the Pavilion.

I've had to change the date to Monday 3 February at 6.30 pm so that Kier's representative can attend. If you have any questions you'd like me to consider putting to Kier or to Reading Borough Council officers, do let me know in advance.

If you have any questions you'd like Reading Borough Council officers or Kier to answer, please send them to me by 5 pm on Sunday 2 February. My email address is: Isobel.Ballsdon@reading.gov.uk

The meeting is open for the public to observe, however due to the need for the 5 committee members to get through the agenda, audience participation is limited and has to go through me.

If you wish to attend, please register in advance by emailing: nicky.simpson@reading.gov.uk to ensure there is enough space and seating in the Pavilion's hall can be set out appropriately.

Currently the Committee makeup is: 3 councillors - Paul Carnell and Jeanette Skeats (both of Thames Ward) and me (Mapledurham Ward); 1 User Group representative and 1 Mapledurham Parish representative.
Posted by Isobel Ballsdon at Monday, January 27, 2020

I'd like to thank Thames Valley Police, in particular PCSO Lauren Jerrom, for organising today's Community Speedwatch operation on the A4074. I'd also like to thank the 4 local residents who came along with me to help support the police.

Speeding along the 30 mph-restricted Upper Woodcote Road near the borough boundary is common place. Even though 8 of us were in high viz jackets near the camera, we caught 38 vehicles exceeding 33 mph in only about 45 minutes.

PCSO Lauren Jerrom has organised a series of Community Speedwatch operations across Caversham.

Do get in touch with me (or, if you live outside Mapledurham Ward, one of your local ward councillors) to get involved. You can also make suggestions of speeding hot spots to be considered for future operations.
Posted by Isobel Ballsdon at Monday, January 27, 2020

As followers will have noticed, I moved across to using my Councillor Facebook page during 2019 in preference to using this Blog/website. Following a resident's request, I'm re-posting my Facebook post here (which I first published last week):
I have been encouraging the council to provide an update on the landscaping and other works they have been making on Mapledurham Playing Fields.

Here it is:
"January 2020 Update"
"In west of the playing fields, the new children's play area successfully opened in its new location for the October half term holidays and has been a popular improvement to MPF. The perimeter wood post and rail fence has been installed along the MPF / Hewett Avenue boundary connecting the breedon gravel footpaths. The highways team will be looking to improve pedestrian access from the highway at the three entrances along Hewett Avenue into the playing fields. A temporary stone path has also recently been installed to connect the breedon pathway on this side of MPF to the new children's play area.
"In the east of the playing fields, the work by Agripower Ltd to form the new sports playing area continued as planned but has been hampered by the large amount of wet weather experienced in late September and throughout October and November. The ground became too wet to continue the work and has meant the installation of lateral drains to one half and seeding of the whole area is yet to be done. Agripower aim to re-start their work once the ground is firm enough to take the machinery to complete this work; which is likely to be in the Spring, weather permitting. The heras fencing is to remain until this work is complete and when the grass has grown and is strong enough to walk on. In the meantime, the Parks team have been placing woodchip around the heras fence line where there has been heavy wear to the grass and become muddy with the wet weather. The Parks team were also going to install the new avenue of trees in December, but due to the delay in completing the new sports area, this has been postponed until next Winter. They will look to install the new central breedon gravel footpath this Summer.
"The pavilion refurbishment works has achieved planning approval and the works are currently out to tender. The tenders will then be assessed and if within the approved budget, the aim is to appoint a contractor to start work in March. Pedestrian access from the community car park to the playing fields is currently by the west side of the pavilion. Once these works start, this side will be demolished and the pavilion slightly extended on this side to accommodate new changing rooms. To do this work safely, will mean pedestrian access from the car park to the playing fields will move to be along the side of the tennis courts."
Posted by Isobel Ballsdon at Sunday, January 26, 2020