Thames Valley Police is appealing for witnesses after a man and his 3 year old son were assaulted in Caversham Heights.
﻿﻿﻿﻿
On Monday 26 November at about 11.15 am the 39 year old father was walking with his son on Kidmore Road.  As they got to the junction with Hunters Chase a female jogger came up behind and, frustrated she couldn't get past, pushed over the boy then assaulted the man by kicking and punching him when he challenged her for pushing his son.

The offender is white, about 5ft 10 ins, in her early thirties, medium to large build, with long frizzy brown hair pulled back in a ponytail.  She was wearing a black jacket and black jogging bottoms, with a pink stripe down the side of both, white trainers, and was listening to an iPod with white earphones.

Anyone who recognises the description should contact PC Conboy via the 24-hour Police Enquiry Centre on 101.

If you don't want to speak directly to the police you can contact the independent charity Crimestoppers anonymously on 0800 555 111 or online at crimestoppers-uk.org
Posted by Isobel Ballsdon at Friday, December 14, 2012

About 50 hardy people battled through heavy traffic and freezing fog for last night’s meeting to hear and ask questions about the proposed application for a new secondary in a lecture theatre in .  Rob Wilson MP hosted the meeting with a panel of: parent representatives Laura Blackburn Finlay & Michaela Brown, plus Tim Emmett & Ash Pajpani from GEMS Education.  Myles Milner represented Reading Borough Council and sat in the audience.


Rob Wilson set the background: that it would be a 4-form entry school for 11-16 year olds eventually educating 600 pupils within walking distance of local families and stated his keen desire to significantly improve educational options for all his constituents.  He said "what we are about to discuss is one proposal, it is by no means a done deal, it is an opportunity and it's up to us as a community to decide whether we take this up or do something else."  He continued "I think most of us will agree doing nothing at all is not an option if we want a school up and running before the 'bulge' of children needing school places hits!"


Laura told the audience why she has got involved with setting up this new and her hope other parents will do so too.  Her 6 year old son currently going through the statementing process is a worry to her as she thinks the prospect of him, come Year 7, managing to travel all the way to the current nearest secondary school is frightening and unlikely.  Although she is apolitical she believes setting up a with the help of GEMS and other parents is the best way to ensure a new, truly local secondary school is set up in this central urban area of .


Laura explained given the short timescale before submitting the bid before the deadline of 4th January they'd decided it best to get the help and expertise of an education provider.  Realistically she said for busy working people and parents without the necessary range of skills and experience to prepare the documentation would have been too huge a task.


Tim Emmett explained GEMS is an international school company and that he’s been with GEMS for the last 3 years, before which he worked for CfBT – another education provider based in .  GEMS runs schools both in the private and state sectors but in the latter on a “not for profit” basis.


There followed a Q & A session, which included:


Why did Rob Wilson call the meeting instead of parents and why is he leading this bid?    Laura explained she asked the MP for his help to sort out a solution to the forecast shortage of secondary places in .  Rob duly carried out investigations, engaged with Reading Borough Council and introduced representatives from GEMS to the parents.  Rob added that having brought the bid this far it was now up to the parents, GEMS and the local community to take the bid forward, with him stepping back into a supportive role.


Timing of events?  Very recently, Rob Wilson spoke with GEMS a month ago about involving them in this idea.


Who is establishing look, feel and aspiration?  Laura replied parents are using GEMS’s blueprint as a basis which they will tweak and amend to suit their needs, therefore anyone else in the community wanting to influence these aspects should get involved!  Tim Emmett pointed out if the initial bid is successful, funding would be provided by the Education Funding Agency (EFA) to hire a Headteacher a couple of terms in advance of the school’s opening so he/she would be responsible for delivering the parents’ look, feel and aspirations.


One parent was concerned his Year 5 daughter would be a guinea pig to which Laura countered there’d be huge benefits for children coming in the first year.  For example as the school would be much smaller than its final capacity of 600 pupils, each child would have more individual attention; furthermore parents would have more say in the school’s creation.  It was pointed out that many Free Schools have been opened already so we are past the ‘guinea pig’ stage!


Governance of school, GEMS involvement?  Laura said the Trustees would contract the running of the school to GEMS as the company has the necessary educational expertise.


Why can’t the location Rob Wilson has in mind be shared and would there be scope for it to expand beyond the 600 in the future?  Rob explained that the site was commercially sensitive, that the site for the bid he put together was nearly lost to a developer because it went public, therefore to avoid that danger it was being kept confidential.  He also does not have permission from the site owner to share the location.  Rob added there is scope for increasing the size in time if appropriate and subject to agreement.


What’s in it for GEMS?  Tim & Ash reiterated that GEMS’ branch of their international business was purely for raising educational standards in the thereby promoting their standing in the education sector.


How will the school fill up?  From the bottom up, although Laura said if there was demand to have more than just Year 7 – ie Year 8 and 9 from opening they would consider the viability of delivering this.


I was extremely impressed by Laura’s enthusiasm and passion, as well as her straight-forward answers.  At the end of the event I was delighted to see several parents signing up to help the group.  I believe many parents share her desire which is simply that “in 10 years it’ll just be the local school everybody goes to.”


You can find out more here:  http://www.east-reading-school.org.uk/ and fill out the survey here: http://www.surveymonkey.com/s/S52HSZK
Posted by Isobel Ballsdon at Wednesday, December 12, 2012

Rob Wilson, MP for East Reading, is hosting a public meeting tonight from 7-8.30 pm at Reading College on the King's Road, RG1 4HU.

This is the first opportunity for the public to hear and discuss the proposed new secondary Free School which will be for 11-16 year olds located in East Reading.  The parent group involved with the scheme will have representatives at the meeting.  I hope parents in East Reading who might in future choose to send children to it will come along tonight.

With any Free School application there has to be the proven need (evidenced by the Council's forecasting) and support of local parents to get through this stage of the process.  If you know families who would benefit hearing about this secondary school, do tell them about tonight's meeting and encourage them to attend.

Notices have gone out via primary school book bags to parents and also flyers have been put through residents' doors to publicise tonight's meeting.

Rob Wilson has been working hard to help deliver new schools in his constituency, this secondary school being the latest.  The first school he helped put together - The University Technical College (UTC) for 14-19 year olds will be opening in September 2013, having gained planning permission last month to adapt the old Reading College buildings on Crescent Road.
Posted by Isobel Ballsdon at Tuesday, December 11, 2012

My lobbying of officers and the Labour administration in the days before Monday's Cabinet meeting paid off.  Just before the meeting kicked off the wording was changed, thereby removing an obstacle in the recommended action that would have damaged the chances of winning £380,000 of grant funding.

Robin Bentham, chairman of the Warren & District Residents' Association (WADRA) sat next to me waiting to hear the report on Mapledurham Pavilion, the last on the evening's agenda.  For once the Kennet Room was warm, but as is so often the case there were hardly any local residents in the audience.

In order to maximise the likelihood of winning these monies Reading Borough Council needs to apply for planning permission to rebuild Mapledurham Pavilion.  However a caveat in the published report that this could only be done subject to "significant progress to closing the funding gap" threatened to undermine the bid.  Why was this so important?  Because it was totally unrealistic to expect WADRA's fund raising group to make "significant" progress in raising £200,000 in the 4 or 5 weeks it will take to prepare a formal grant submission.

I was absolutely delighted the administration heeded my request and effectively neutered the caveat by deleting the word "significant" and said as much in my speech.  Also I commented that it is an extremely exciting time as we are closer than ever before to the possibility of realising a replacement Pavilion.

Another important action agreed was the approval of the use of Virgin Money Giving so donations will be eligible for Gift Aid, ie the tax is reclaimed.  This means for example a £10 donation will be worth an extra £2.15.  The Cabinet members were the only people eligible to agree this because of their role as Trustees of the Mapledurham Playing Fields Charitable Trust.

The months and months it has taken to achieve this have been exceedingly frustrating because we - the fundraisers - have missed out on claiming back the tax on donations made to date.  However at least it will give a huge boost to future fund raising and hopefully will help encourage people to give larger donations to bring us closer to our target.

WADRA has done a superb job mobilising the local community to fund raise with over £22,000 collected in the last year or so, of which Sunday's Christmas Fayre raised £380 profit and the recent metal recycling a hefty £840.

The local architect, who is donating his time to develop and draw up the plans for free, currently estimates the build to be £690,000.  RBC officers state an additional 10-15% should be budgeted for fees and other charges.

The Labour administration has reiterated the pledge originally committed by the Conservative-led local Coalition two years ago of £100,000 Section 106 monies .  A further £75,000 has been raised or promised, which leaves a funding gap of £200,000 as long as the £380,000 is secured from the Football Foundation's grant pot.

The next important date is Monday 11th December as officers and are will be meeting with the Football Foundation to try and progress the Council's initial letter of interest in applying for grant funding.  Thanks to the force of the caveat having been deleted, I am substantially more positive about the possible outcome.
Posted by Isobel Ballsdon at Thursday, December 06, 2012 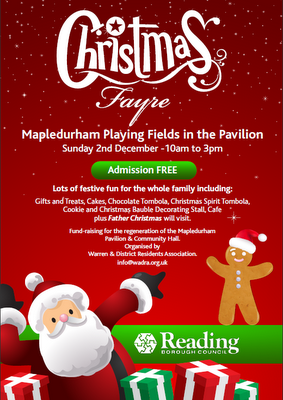 Tomorrow, Sunday 2nd December, do come along to Mapledurham Pavilion for the Christmas Fayre between 10 am and 3 pm.

There will be lots of stalls selling all kinds of things including cakes, stocking fillers, plants and home decorations.

Mulled wine and a BBQ will be on offer, lucky dip gifts on tree and bauble and biscuit decorating.

Father Christmas is coming and children can have their photo taken with him.

St Peter's Church choir will be singing at noon.  So do come, bring your friends and family along and get into the festive mood!