Reading Borough Council has published details of a virtual celebration this Thursday, 1 October - see below to which everyone is welcome to attend:

Reading will be celebrating National Older People’s Day 2020 with a free online event on Thursday 1st October, highlighting the contribution all older people make to the Reading community.

The event this year is a virtual one which be held on the Reading Culture Live website. In previous years the event has been held at Broad Street Mall and this year we acknowledge the Covid-19 situation which has created increased loneliness and isolation for older people. The aim of this year’s National Older People’s Day event is to demonstrate the resilience of older people in our community and the great work of voluntary organisations and community groups who have supported older people during difficult times.

The event is organised by Age UK Berkshire and Age UK Reading, with support from Reading Borough Council and members of the Older People’s Working Group.

The online Reading Older People’s Day event then moves to the Reading Culture Live website www.readingculturelive.co.uk. A video introduced by Mayor of Reading, Cllr David Stevens will showcase the rich array of local services that have supported older residents during the pandemic and lockdown. An information booklet with the content of the video and information about local services will be published. If you would like a printed copy, please contact opwg@reading.gov.uk or call 07811 026070.

Memory project video; the second video reflects on the town during Covid-19 and how it has affected the older people. Contributions will be shared featuring stories, thoughts and memories.

The videos will be available on the Reading Culture Live website from 1st October onwards to watch at a convenient time.

Lead Councillor for Adult Social Care, Cllr Tony Jones, said: “Older People’s Day is a lovely chance to celebrate later life and the huge contribution older people make to our communities. This year our event moves online. I’d encourage people to register to join our virtual coffee morning and watch the videos celebrating local services who have supported older residents during the pandemic, and the memory video which has captured a snapshot of this unique time and how it has affected the older people of Reading.

Please spread the word, invite your friends, family and anyone you know who might benefit.”

For more information including support with IT and accessing the event please call, 07811 026070 or email opwg@reading.gov.uk

Construction progress of The Heights at MPF 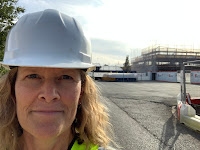 On Friday I went to Mapledurham Playing Fields and visited The Heights school building to see how construction was coming along. With me kitted out with my safety hat, high viz and safety glasses, Andy Mason - Kier's Senior Site Manager - kindly showed me around.

As is visible from outside Kier's boundary fencing, the school's steel frame is encased by scaffolding, with monoflex on the western side to give residents living closest to the school privacy from the workmen. 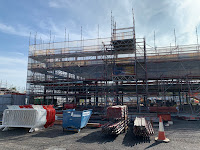 Inside the site I was struck by the quantity of grey soundproofing panels on the inside of the construction boundary fencing. Also noticeable was the drop in ground level in the north-west corner, the school being at least a metre lower than Hewett Close.

One challenge the pandemic has created is the need for Kier to increase welfare space. Their canteen, which usually would hold up to 30 people, can only be used by 5. So 2 further canteens are being delivered, plus an extra office and toilet block (the latter will be connected to the tank on the north-eastern side to keep any smells away from residents' homes).These welfare units will take up space on site which means construction material deliveries must be timed meticulously for immediate use. 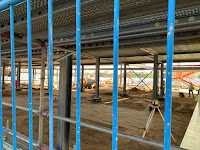 Andy showed me the ground floor which was being worked on as we spoke. Preparation of the floor slab includes a 250 mm layer of sand then an insulation membrane, finished off with 250 mm of concrete. This should be completed this week.

The first floor's concrete was poured last week. Next goes down the latex. The steel framing system (SFS) arrives this week. It will be installed first on the western side. Then, to minimise future impact to residents nearest the school, this side will have its exterior boarding completed as this will help shield them from the rest of the works. 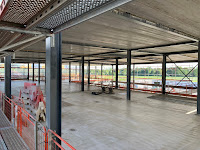 To minimise noise, the steel panels have been cut to size off site at the manufacturers. This has meant the concrete floors and the frame have had to be constructed incredibly accurately with a tolerance level of just 3 mm instead of the normal 25 mm.
Kier are going above and beyond too by building a soundproofed room to house a cutting machine, again to minimise disturbance to residents.
We climbed up the temporary, external stairs to the roof, where all the school's plant will be located as well as a large quantity of solar panels. 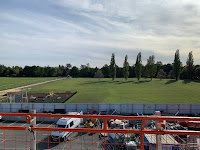 It was fantastic to see the Playing Fields from this view point. They are looking so good. Installation of the path from Chazey Road to the Pavilion, which will make the area much more accessible for all, is nearing completion (visible in the photo).

It was good also to get a bird's eye view of the Pavilion's spanking new roof, completed in the last few weeks. I'll post a picture of this as well as internal photos in the next few days once I've checked out how the Pavilion's refurbishment is going.

The school is on track for Easter 2021 completion. If you have any questions, do let me know.

I am thrilled by the success of the "One Way No Way" Caversham Facebook Group to get Reading Borough Council's Labour administration to eventually see common sense. The unpopular one-way system's bollards drilled into the road yesterday, were this afternoon removed! 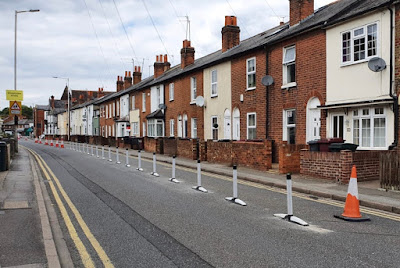 It is a shame Labour didn't listen to local residents and my Conservative colleagues back in May 2020 when we all said the proposals were going to cause congestion, thereby increase pollution and fail in their purpose.

At least it wasn't as colossal a financial fiasco as Labour's "One Way IDR", announced back in 2006 - the plans of which cost residents more than an eye-watering £1 million!

Here's the council's full press release about this welcome, if over-due, u-turn:

Caversham One Way Systems to be Removed This Week

TEMPORARY one way systems along Caversham’s Gosbrook Road and Westfield Road will be removed this week in response to concerns raised by the local community.

Reading Borough Council is moving swiftly to revert to the previous road layout after listening to the views of local residents and businesses in Caversham and seeing first-hand the dangerous behaviour of a minority of motorists ignoring the new one way systems. Work to reverse the temporary scheme is expected to be fully complete by the weekend.

The one-way systems in Caversham are just one part of a wider package of Active Travel schemes introduced in Reading under temporary powers afforded to all Councils by the Government in response to the pandemic. The intention is to make social distancing easier by creating more road space for pedestrians and cyclists, whilst recognising the on-going restrictions on the capacity of local public transport.

Central Government awarded funding to local authorities, including Reading, to implement road schemes in response to Covid 19, which continues to be a threat. Both the funding and road schemes were awarded under temporary powers which did not allow for the usual extensive period of consultation with local residents prior to implementation. The Gosbrook Road and Westfield Road schemes were specifically designed to alleviate pressures on social distancing caused by narrow pavements in the area, which are also on routes to schools.

Delays in the supply chain caused by large numbers of councils attempting to source the same road infrastructure at the same time meant the scheme was significantly delayed. As a result it was implemented more than six weeks later than originally planned. The result of this delay was that traffic levels were much higher than anticipated at the point of introduction which - combined with the constrained road network in Caversham - has led to traffic bottlenecks created in the area. A minority of motorists have been observed flouting the one-way systems whilst driving dangerously.

Ward Councillors have been in the area collecting feedback from local residents and businesses since the scheme’s introduction last week. This has been shared with the Council, leading to the decision to reverse the scheme.

“I would like to apologise to residents and local businesses in Caversham for the obvious disruption and inconvenience caused by the introduction of this temporary scheme. We are now moving swiftly to reverse it due to the widespread lack of support in the local area.

“The scheme was well intentioned to make travelling by bike or walking easier in response to the pandemic, which was important in the narrow pavements and streets of Caversham. We were also very aware the same constrained road layout in the area meant these changes were challenging. It has quickly become apparent there is a lack of local support for the scheme which is why we are moving quickly this week to revert to the previous road layout.

“It is worth noting the Government guidance issued to all Councils under the Active Travel scheme was that changes could be implemented under temporary powers and without prior consultation. This was understandable in the circumstances, but it does emphasise again the importance of local consultation before any major changes are introduced.

“I would like to thank ward Councillors who I know have been out speaking to local residents and businesses about the scheme and feeding back those views to the Council. We have listened to those views and the old layout will be back in place by the end of this week.”

“It is important to note that the Council continues to fully support the principle of Active Travel schemes and the significant benefits they bring to people and communities. The fact that this specific scheme has not worked does not change that position in the slightest.

“There are a number of Active Travel schemes already in place across the Borough, many operating successfully as part of the first phase of work. We will continue to monitor these closely and will consult widely before any are made permanent.

“We also look forward to the result of our ambitious Phase 2 bid to Government which includes key ‘missing link’ cycle lanes fully segregated from general traffic.”

Details of all Reading Borough Council’s Active Travel schemes can be found at www.reading.gov.uk/activetravel

READING.GOV.UK
Reading Borough Council
With social distancing measures likely to remain in place for some considerable time in response to the Covid 19 pandemic, the Council has moved to design a series of schemes to create more space for…
Posted by Isobel Ballsdon at Wednesday, September 02, 2020