Today the council has notified me of a delay to taking down the fencing around the newly levelled and grassed area of pitches. This is because the mini heatwave set back the grass by a week or two. The heavy rainfall that followed has made the ground soft so that any vehicles collecting up the fencing could easily damage the grass. 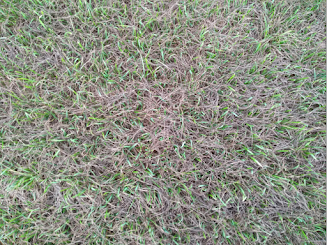 Although the delay is very frustrating, I support the decision as it is prudent to let the young grass establish itself before allowing us all to use it. Officers will review the situation and hope to take down the fencing in the week commencing 7 September.
As the area between the Kier site and the play area has been churned up it has been raked and the council is in the process of arranging a temporary surface to be laid in the week commencing 24 August. It will be returned to grass after the works are completed but is likely to be in place for the duration of the winter according to officers.
Posted by Isobel Ballsdon at Thursday, August 20, 2020

MPF: Update from Reading BC officers

A diligent officer sent out the following update about Mapledurham Playing Fields' pitches, the landscaping works and the Pavilion, yesterday (Saturday 8 July).

The news our community has been eager to hear about is the coming down of the fences to open up the  newly levelled and grassed pitches on the eastern side of MPF. The good news is we shouldn't have to wait long. Monday 24 August is the likely date, though this is dependent on weather conditions.

In other news the central footpath along the desire line walking/running/cycling across MPF from the Pavilion to the entrance on Chazey Road will start later this week. It'll further improve accessibility for all and with the avenue of trees that will be planted along it in the tree planting season, this landscaping will be an attractive and eye-catching feature.

Here is the officer's update:

The new grass sports turf is steadily growing, has been cut several times and is regularly assessed by an independent expert. The area around the play area has been be re-opened for recreational use with the heras fencing adjusted to allow access on the west and south sides of the play area.

The main area of new turf is starting to become established in most areas but the grass along the new drain lines is vulnerable to dogs digging and could be damaged by some activities such as informal kickabouts. See the photos to show the differences in the growth of areas of grass. We are hoping that the grass will become more established over the next few weeks.

We are looking to remove the fence around the boundary from Monday 24th August to allow access for recreational use. However, if the area becomes damaged in large parts by dogs digging or over use then we may need to re-instate the fencing across the area to protect it. We ask that playing sports eg football is kept to the west side of the playing fields, next to the new play area and will install some goals to encourage use on this area.

We will be starting work on the central footpath on Thursday 13th August. This will involve moving the heras fence line running north to south to enable the path to be installed. The contractor will form a small compound adjacent to the pavilion works to avoid materials being stored on the playing fields and will maintain access to the popular new play area. Works will continue throughout August and September to install the new path and benches and then the new footpath lighting before the autumn wet weather sets in. In November we aim to plant the avenue of new trees.

AYM are making good progress with the new side extension now taking shape, and new roofs and external cladding being installed. Work will then mainly be inside installing new heating and electrics. The internal fit out and decoration will follow as we aim to complete the works by late October.

A look inside Mapledurham Pavilion

I was thrilled to check out the progress of the comprehensive refurbishment of Mapledurham Pavilion in July.
The photo to the left shows the main hall. It remains the same size, though without the walls and ceilings in place the wood gives the allusion of a smaller space.  The main entrance from the car park is in the far right corner (to the right of the propped-up orange door).
Straight ahead are the spaces where two mirror image FA standard football changing rooms are being created. This is a conversion of the old storage rooms and kitchen, as well as a small extension. Access will only be from the western side of the Pavilion through an exterior door to each one, with a wall between them and the hall.
On the left hand side of the photo you can see the steels - the sole remaining feature from the Warren & District Residents Association's (WADRA) refurbishment in 2019. These gaps will have glazed doors with exterior security shutters. It will be fabulous to have the views across the playing fields restored and improved after over 20 years! Back when my two were little and I ran the parent and toddler group 'Escape', the council boarded up the old, rotting windows following several broken windows.
New flooring will be going down as there was asbestos under the lino that was laid in 2019. The Football and Tennis clubs both agreed with me that it was sensible to eradicate the asbestos at this opportune time rather than store up problems for the future.

The photo to the left shows the space where the new kitchen will be. You can see that two large serving hatches are being created - one for serving the main hall, the other - which will have security shutters - for serving events on the playing fields.

The kitchen is a much more generous size than the old one and also benefits from having two doorways. These improvements should make it fit for catering for large events.

WADRA is paying for kitting the kitchen out with appliances using money fundraised (from residents and Festival Republic's donations).
In the hall's north-east corner is a door to what will be a large storage room for the hall's regular user groups (see right).
Next to the storage room will be a door to a widened, reconfigured corridor giving access to the kitchen, the men's/women's/and accessible loos and the Tennis Club's room.
The corridor also leads to the old changing rooms which are being converted into two rooms available for hire for meetings or other small events.
Two large windows have been made in the wall facing out onto the car park, transforming the dark cramped old changing rooms into inviting, light spaces.
You can see into the first one in the photo to the left (viewed from the corridor with the doorway to it straight ahead and at the far end of the room the two large windows).
According to the council officers - who have been doing an excellent job overseeing the project - the works should be finished ready for the Pavilion to re-open this October. Hopefully by then covid-19 restrictions will have eased further and the user groups and others in our community will be able to make full use of it.
The improvements have been funded predominantly by Department for Education money paid to the council (Trustee of Mapledurham Playing Fields) as part of the legal agreement for building The Heights School.
Posted by Isobel Ballsdon at Thursday, August 06, 2020

The new grass on the eastern side of Mapledurham Playing Fields' pitches is looking very good!
The contractors, Agripower, have cut the grass several times now and added feed to help strengthen it. I was keen to take the opportunity in July to inspect it with officers. I took this short video standing in the middle which hopefully gives you a good view. 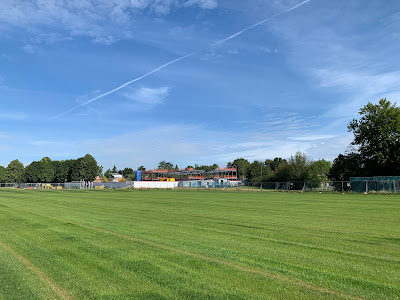 I'm as keen as anybody to get the fences down so that everyone can enjoy the space and new grass - however for a number of reasons, sensibly officers have held off.
As can be seen in the photo to the right, there are lines where the grass is thinner - this is above the drainage channels as it is taking a little longer for the grass to establish as a result.
Another reason for the reluctance is that vehicles would need to drive on the new grass so it must be able to withstand this, otherwise the huge investment (funded by part of the developer contribution monies from the DfE) could be put at risk.
I hope to be able to have a better idea when the fences will be coming down later this week.
Posted by Isobel Ballsdon at Tuesday, August 04, 2020