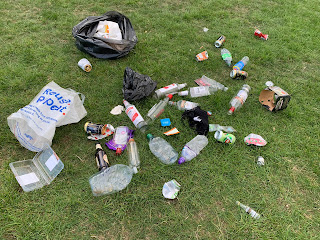 Last night, Saturday 28 May, about 40 teenagers had a party at Mapledurham Playing Fields near the woodland in the north-east corner.
First thing this morning I found a girl's bag (not shown in photos) which looked like someone had rifled through it as it was inside out with contents strewn a little way away but there wasn't any money or cards.
If I am right, I fear it was one of the group. I haven't touched the bag with my hands just in case the owner wants to report a theft to the police.
Amongst the items were some keys and jewellery. Do get in touch if they are yours, my number is 07717 292 003. 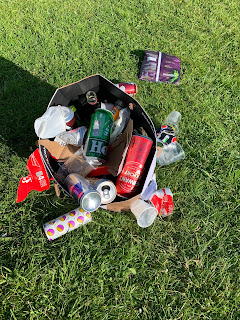 Leaving that aside I'm pleased to say I didn't find any broken glass nor vandalism to trees.

However the vast majority of the youths, who I'd guess were Year 13 & 14s, weren't strong enough to take their lighter, empty glass bottles of vodka, cans or plastic bottles over to one of the litter bins.

This is ridiculous as they will all have had to carry the full bottles and cans a much longer distance to get to MPF. The black sack in my first photo is mine, but the Tesco and other bags had been used to bring the food and drinks to the party. The bag in my second photo had actually partially been filled by the teenagers, but none of them could be bothered to carry it to a bin.

Let everyone enjoy the open space, so leave it in the condition you find it. Clear everything away you bring. Thank you.

If you are a parent, please drum it into your teenagers to take responsibility for their rubbish. Other people shouldn't have to clear up after them.

UPDATE: I am pleased to say I've managed to reunite the owner of the bag with her possessions.