As a result of some requests, I am publishing the introduction I gave at the start of the public meeting on Tuesday 17 June.  I haven't checked it against the Youtube footage but anyone is welcome to.

My name is Isobel Ballsdon. I represent Mapledurham Ward. I am joined by Cllr Ed Hopper who is one of the three councillors for the neighbouring Thames ward.

We have called this meeting to hear the views of Thames and Mapledurham ward residents.  Tonight was the first possible opportunity to hold this meeting.

Before I go into our objectives I would like to thank the church wardens who have been incredibly supportive and gone to a lot of trouble to prepare for the meeting. As I was given a reduced rate to hire the church I hope you will consider making a donation towards the church's funds.  Gift Aid envelopes are available to increase the value of your donation if you so wish and the donations bowl is at the back of the church.

The objective in the first instance is to listen to your views about the news on 5 June that the Education Funding Agency has bought the site on Upper Warren Avenue for the permanent home of The Heights primary school.

In addition we hope to be able to provide answers to some of your questions. Anything we can’t answer we will take away and put to the relevant authorities.
To explain the process by which the point has been reached where the EFA has purchased the site
(i)                A group of wonderful and inspirational residents made a detailed bid for a primary free school to serve the west of Caversham
(ii)             (ii) The DfE determined through consultation, including consultation with the Council, that there was a justifiable demand for a school in the Heights catchment area and, having satisfied themselves that there was indeed a demand, they then instructed the EFA to find and purchase a site within the catchment area.
The EFA is an independent arm of the DfE and has not consulted with the councillors or the MP or the council, though they will have asked the Council if they owned any land in the catchment area which they were prepared to offer.

We hope it may be possible for us as a community to work towards a shared goal: namely to deliver the primary school that a generation has needed and that generations to come will benefit from, to ensure our community thrives.

In attendance we have:

The Education Funding Agency (EFA) does not send representatives to attend public meetings before it has information on which to consult, eg outline plans to share about any free school project.

To ensure transparency for the planning process, Reading Borough Council is not sending representatives from Highways nor Planning.

I am delighted that it has been possible for Rob Wilson, our local Member of Parliament, to join us tonight and he will be chairing the meeting."
Posted by Isobel Ballsdon at Sunday, June 29, 2014

Less than a handful of residents have questioned the appropriateness of me participating in the decision making process when a planning application comes forward for The Heights primary school.

I have made no secret of the fact that I support the setting up of this much-needed school for families in my ward, however I am remaining impartial over where it is sited.

Chris Brooks has asked me to respond to your e-mail below. It raises the possibility, given your current position and intentions, of an allegation that may be raised against you of apparent or actual bias/predetermination if an application for planning permission comes before PAC. I consider that your approach is what a reasonable member of the public would expect an elected Member to do and this would not debar you from taking part at PAC including voting on the application if you wished to do so.

I take this  line because the law on predetermination has been relaxed by the courts in recent years with judges recognising the democratic role that Councillors have in the planning context. This was expressed in the High Court in 2006 where the judge said “Councillors will inevitably be bound to have views and may have expressed them about issues of public interest locally. Such may, as here, have been raised as election issues. It would be quite impossible for decisions to be made by elected members whom the law requires to make them if their observations could disqualify them because it might appear that they have formed a view in advance”

He went on to say “..Unless there is positive evidence to show that there was indeed a closed mind I do not think that prior observations or apparent favouring of a particular decision will suffice to persuade the court to quash the decision”

This view was endorsed by the Court of Appeal in another case two years later. This approach also received statutory status by virtue of Section 25(2) of the Localism Act 2011 which means that in so far as prior expressions of opinion are concerned (or for that matter other means of prior indication of view) these are not themselves sufficient to impugn the decision.

In short the law requires a Member to have an open mind at the point of any planning decision but not an empty one.

I hope this helps but if you require any clarification/further assistance please do not hesitate to contact me.

Sorry I have just thought of a supplementary question:  May I have your permission to publish your response on my website please?

I apologise for the delay in responding to your e-mail below. I am content for you to publish the advice on your web site with the caveat that it is the law as it is now. Although this is not an area of law that changes frequently a judgement of the High Court could change the position.

Line up for tonight's public meeting about The Heights

There is even more interest in tonight’s meeting, 7.30 pm in St Andrew’s Church, than I had anticipated.  I hope that everyone arriving will be considerate towards the young children leaving, who will have been enjoying the “Rainbow” group in St Andrew’s hall.

The line-up of attendees for the public meeting, in no particular order, is as follows:

The Education Funding Agency (EFA) does not send representatives to attend public meetings before it has information on which to consult, eg outline plans to share about any free school project.

To ensure transparency for the planning process, Reading Borough Council is not sending representatives from Highways nor Planning.

For health and safety reasons if the church reaches capacity, further people will not be admitted.

The church wardens have been incredibly supportive and gone to a lot of trouble to prepare for the meeting. As I was given a reduced rate to hire the church (as it is for the community) I hope you will consider making a donation towards the church's funds.  Gift Aid envelopes will be available to increase the value of your donation if you so wish.

I hope that comments and questions tonight are constructive, and that by the end of the meeting we, the local community, will be trying to work together, united in the shared goal: to deliver the primary school that a generation has needed and that generations to come will benefit from, to ensure our community thrives.
Posted by Isobel Ballsdon at Tuesday, June 17, 2014

The location of the Public Meeting that I and my colleague Cllr Ed Hopper have arranged for Tuesday 17 June has been moved from St Andrew's Hall into the Church next door.

Due to the large number of residents who have told me of their intention to attend, the church wardens have kindly agreed to this change.  The church has a greater seating capacity than its hall, plus it benefits from a sound system. The start time remains 7.30 pm.

Ed & I will be listening to you, the people who elected us to our wards (Thames and Mapledurham respectively).  To be able to represent you we need to understand your views so that we can work effectively on your behalf, as well as keep you informed on this huge issue for our community in the coming weeks and months.

I trust you will appreciate that we are doing our due diligence, so will not expect us to have answers at this stage to every single issue that you may raise.  However we are working hard preparing for the meeting, including firming up the list of representatives who will be in attendance.

As it was the Education Funding Agency (EFA) that chose and bought the High Ridge site in Upper Warren Avenue (UWA) I'm keen that the EFA sends a representative.  In addition I have asked that someone from RBC's Highways Department attends because of the major challenges that would have to be overcome to ameliorate the school's impact on the roads in the area.

I have been speaking to lots of people since the announcement and I have received many emails and phone calls too.  I understand the impact this has had through the heartfelt concerns many have expressed to me. I am glad that the vast majority accept that Caversham Heights does indeed need The Heights primary school.

As one of many whose own children had problems getting a local primary school place I know first-hand what a nightmare the process is.  This is why I have been supporting The Heights' Trustees, who are opening this September in temporary accommodation in the old Caversham Nursery site off Gosbrook Road, as without the school even more children from Caversham Heights would be forced to primaries south of the river or, north of the river beyond the established, over-subscribed local primaries.

It is neither within my scope nor expertise to fathom how the EFA can deliver a school on UWA whilst overcoming all the planning issues including impact on the highways: However it is my duty to represent all my ward residents whether they are supportive or not of the EFA's choice of site.

If you are unable to come to the meeting, or feel it would be too stressful to attend, please do feel free to email your views to whichever of us is your local councillor (if you go to vote at Mapledurham Pavilion, I am your councillor).  My email address is:  mail@isobelballsdon.com  Ed's RBC email address is: Ed.Hopper@reading.gov.uk
Posted by Isobel Ballsdon at Sunday, June 08, 2014

BREAKING NEWS:  The permanent site for The Heights primary school which has been bought by the Education Funding Agency (EFA) has just been announced.  It is a privately owned development site on Upper Warren Avenue known as 'Highridge'.

There has been substantial interest in where the permanent home for The Heights is going to be and therefore I, together with my colleague Cllr Ed Hopper, will be hosting a public meeting to give local residents the opportunity to give their views.

The meeting will be on Tuesday 17 June at 7.30 pm in St Andrew's Hall, Albert Road.  In attendance, Head Teacher Karen Edwards and land adviser, Dan Pagella, will be there together with other members of The Heights.  In addition Kevin McDaniel, Reading Borough Council's Head of Education.

As any regular reader of my blog will know, the Caversham Heights area has for well over 10 years desperately needed a primary school to give local families a realistic chance of a primary school place.

It proved a challenge for the EFA to find a site and this was the only viable option.  I am keen to hear your views so that I can represent the interests of everyone in my ward.  Do spread the word & come along to St Andrew's Hall on 17 June.  A leaflet can be downloaded and printed off here
Posted by Isobel Ballsdon at Thursday, June 05, 2014

This Sunday, 8th June between 2 and 5 pm, Mapledurham Pavilion will host an animal welfare Fun Day for all the family to enjoy. 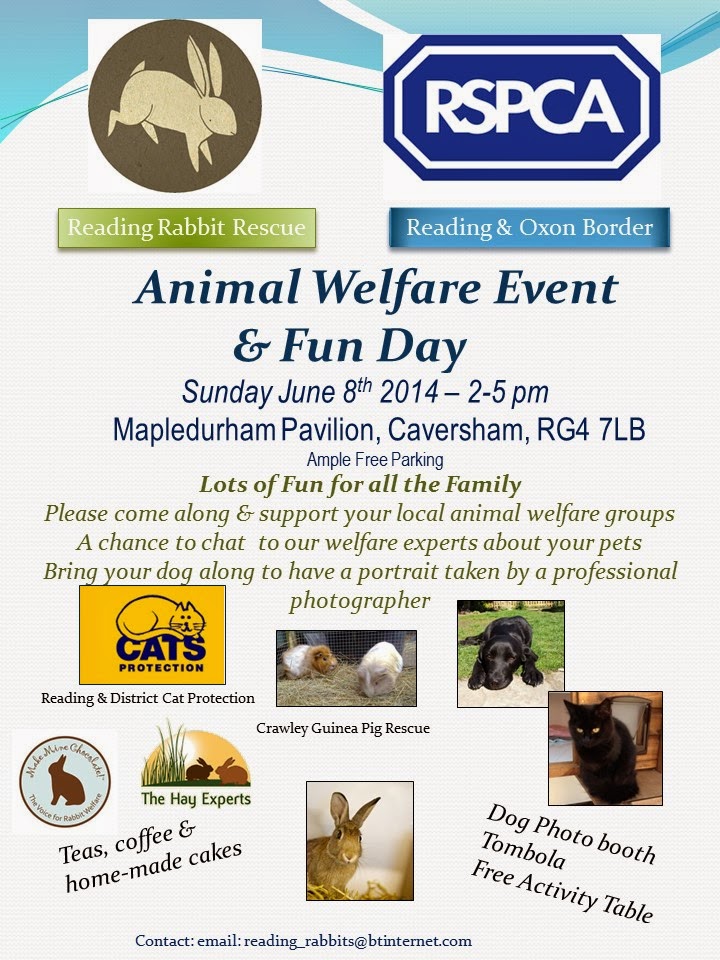