This short week has been a busy and stimulating one for me.  On Tuesday as chair of governors of The Avenue Special School Academy I accompanied a group outing (courtesy of Proctor & Gamble) to the Olympic Stadium.

The pupils, staff and I were completely blown away by the Visa London Disability Athletics Challenge.  The stadium was fabulous, the competitors awesome! 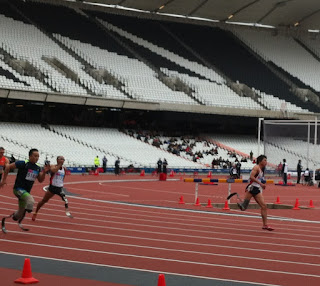 My favourite events were the blind sprint races where the athletes ran alongside a sighted sprinter with an elastic between their partner's & their wrist.  I found the blade runners particularly inspirational - they were so fast I missed filming Richard Whitehead setting a new World Record for the mens' 200 m, only catching those behind him!

The music system was great and the pupils sang and danced along, sometimes screaming with laughter at the lyrics, which they knew back-to-front! 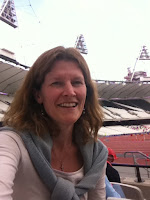 Although the stadium was pretty empty for this trial day, it wasn't hard to imagine what the atmosphere would be like for the Games.  This week it wasn't possible to appreciate the events taking place on the opposite side of the stadium because there was no screen-footage.  However I'm sure come the summer everything will be up there for all to see and enjoy.

The children absolutely loved it and their day was made by a Channel 4 camera team filming them cheering exuberantly for a forthcoming advert for the Paralympic Games!

To follow from that memorable day, this morning the full governing body and I went round the first floor 'extension' of The Avenue School which was very exciting to see.  The School is part of a larger building which incorporates The Avenue Centre, and it is in to the latter that we are extending.  The works will enable us to have two extra classes of pupils (16 in total plus staff).  These are much needed places and will be no problem to fill as we have a long waiting list.

As well as the site visit, I spent the rest of the morning in Finance & Full Governing Body meetings.

As an aside, and going back to the Stadium, I was thrilled today to learn my friend Dave Luckett managed to get tickets to the men's 100m. I knew he was applying but never dreamt he'd succeed!  I didn't apply for any tickets but am sure anyone who goes to the Paralympics or Olympics will have an absolutely wonderful time!
Posted by Isobel Ballsdon at Friday, May 11, 2012