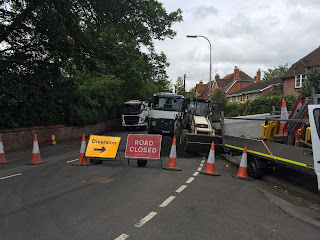 As mains replacement works by SGN are yet to be completed, the planned resurfacing works between Highmoor and Ilkley Road junctions of the A4074 will not be resurfaced this year.

Update:  RBC has just announced that the extent of resurfacing will be even more limited as unexpectedly the contractor has found road tar.  Apparently tar bound material is classified as hazardous when it is excavated and has to be specially treated disposed of separately.  As RBC was unaware, no suitable arrangements had been made which has delayed work.

I've been reassured that those areas the contractor is unable to resurface this year will be included in next year's contract when RBC will have been able to plan for the safe disposal of the material and the associated costs.
Posted by Isobel Ballsdon at Friday, September 04, 2015