This evening, Thursday 25 February, details of a temporary closure of the access to Mapledurham Pavilion's car park to vehicles* have been sent to the Mapledurham Playing Fields Management Committee, of which I am the chairman.
The DfE's contractors, Kier Construction, need to close the car park from 8th March until 19th April to carry out car park improvement works. The works will much improve the car park and enable the school to open and function safely from Monday 7th June.
* Between 22nd March until 19th April, there will be no access whatsoever from the Upper Woodcote Road access to MPF. Pedestrians, cyclists and runners will all have to access MPF from elsewhere.
Ideally these works would have been scheduled earlier to have them out of the way before the covid-19 restrictions started to ease. Sadly this was not possible. Originally the scheme was going to take only 2 weeks, however because of poor drainage the scheme had to be changed. Although the short notice is regrettable, the Chair of Trustees has given permission to close the car park in line with the officer recommendation because pressing ahead with the works will have less impact on the community than if the works were to be delayed. Kier are letter dropping nearest neighbours and have put up notices in the car park to give warning of the pending car park closure. 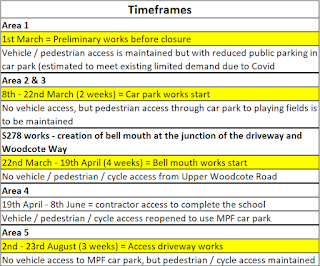 The MPF car park's driveway work will be deferred to allow completion of the rest of the school works so the latter can open on 7th June.
The driveway work is going to be scheduled to take place in the Summer holidays from 2nd August with an estimated 3 weeks of no vehicular access to the car park.
As I know residents living around MPF would not welcome contractors parking in the nearby roads, I'm pleased to confirm that Kier are expected to use Rivermead car park for temporary contractor parking. Kier will be providing a shuttle bus to MPF site whilst the MPF car park is closed between 22nd March and 19th April. From 19th April to 6th June there will be an area in the car park by the school site that will still not be available for parking, as it will revert to being Kier's construction vehicle route into the school site.
In front of the Pavilion there'll be a combined materials storage (block pavings, etc) and vehicle area which will be reduced in size as the build continues. Council officers expect that the car park may well be used increasingly by the public from 2nd April onwards as Covid restrictions start to be relaxed for outdoor gatherings, tennis and football. Kier have given an undertaking that this area in front of the Pavilion would be opened up for community parking if the car park becomes busier. Kier have a member of staff who will be stationed in the car park to manage the parking.
Through the school build the Council have instructed Kier not to use the car park. No parking will now be available on the school site for the final month or two of the build, allowing some limited Kier parking in the MPF car park is preferred to the alternative of increasing parking on the adjacent roads for the final build period.
Sports pitch secondary drainage works potential delays
The Council has delayed this final piece of work until 8th June as regular access throughout is required to complete the drainage. This work is weather dependant, but pitches can be used pretty much the day after the work is completed, officers tell me, so no impact on the following football season is expected. The work includes dressing the surface of the sports turf with sand which will take a short while, and some rain, to disappear into the turf. There is a risk that if there is a prolonged dry spell, cutting the grooves into the ground may need to be delayed until the ground softens. This work will take about 3 weeks but will not require the field to be closed off.
Area 5 works to main access into MPF's car park
There is no option but to close the main access strip to install the block paving along this section of the access road to MPF's car park. RBC officers will be liaising with the Tennis and Football Clubs over the next couple of weeks to consider the impact on these clubs.
If you have any questions, do contact me. Isobel.Ballsdon@reading.gov.uk or 07717 292 003.
Posted by Isobel Ballsdon at Thursday, February 25, 2021