A Fascinating & Unique Role Model on the Empowerment of Women 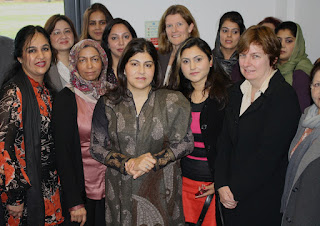 Sayeeda is a fascinating and unique role model, not just for women, but for anyone and everyone.  Born in Yorkshire to a mill worker who had immigrated to England, she has an impressive CV culminating in becoming the first female Muslim parliamentary candidate for the Conservatives in the 2005 General Election and then in 2010 becoming the first female Muslim Cabinet member.

We heard about some of the challenges Sayeeda has faced, most recently how she juggles her family life (husband & 5 children) with her extremely busy work life.

Talking about the start of her career, like many Asian female graduates, she chose law.  She started out as a prosecutor, going on to set up her own private practice with a partner and being a defence lawyer.

9/11 was a life-defining moment for her.  Since that disaster she feels she is seen as a Muslim rather than anything else.

After her speech she took questions.  Several were about specific cultural difficulties Asian women face in Britain.  However it didn't take long before everybody acknowledged that many challenges are common to women whatever their heritage, eg the perception by many older people that women should stay at home to bring up the children and look after the husband; or that a woman's career is secondary to that of their husband.

After a personal chat about the tremendous support her husband is; about her extended family; and the juggling act of trying to achieve a happy work/life balance; she admitted that it isn't easy to get it right.

Everybody agreed with her that all mothers feel guilty - that's part and parcel of our lot. She told us her belief that one of a mother's most important jobs is to bring up our sons to respect and treat women equally. We shouldn't leave this task just to men.  We should instill it in our sons ourselves starting as soon as they are born. Sayeeda joked that if our own households are based on equality then when our sons get married their wives won't have to retrain them!

At the end Sayeeda challenged everybody 'to help yourself - if you won't, why should anyone else?  Help someone else - because no one else will; work out your action plan, where you want to get to in life... and go for it'.

Meeting Sayeeda was thoroughly enjoyable and highly stimulating.  No wonder she has got to where she is today
Posted by Isobel Ballsdon at Friday, December 02, 2011