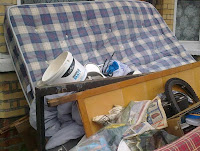 Labour has cut the student waste end of University year collections.  To top it all, they've had the temerity to blame their cuts on the last administration - our local Coalition.

To make cuts, an administration puts the sums in the 'gold pages' budget report for the forthcoming year.  Our Coalition made no such cut.  So why is the new minority Labour administration making this cut?

It appears to boil down to the Greens & Labour's pre-election pledge to halt the implementation of our Green Waste collection charge (£22.50 in comparison with Labour-run Oxford's £35).  Invoices should have gone out and been paid by the end of May.  But the Greens & Labour stopped this at a loss to the Council of tens of thousands of pounds.  We were going to use this income towards paying for the service; a service which after all is optional as composting in your back garden is the environmentally sustainable answer.

This is an extract from what Kirsten Bayes (ex-Deputy Leader of the Council) has written:  "This is what has happened: Reading Labour have chosen to reverse the garden waste charge, which would have mostly been levied on those with larger properties with bigger gardens (i.e. the better off), and to pay for it have decided to impose a service cut on those living in the most densely populated (and poorer) areas. The garden waste charge would of course have been optional (other alternatives such as local composting being available), whereas the loss of end of term collections will affect everyone. It is clearly going to be taking place without wider consultation: there is no time to do otherwise.

"Say what you like about Labour, but politically naive they are not. They know that people who would pay for garden waste collections are a vocal, swing voting minority. Those who live in the poorer areas affected by their cut will, they believe, vote Labour anyway and are often old, disadvantaged or from minority communities.

"This cannot be the only cut to pay for Labour's election day bribe: the budget is just too finely balanced. Keep an eye on flytipping service levels, graffiti clean up service levels, food cleanliness enforcement, dog fouling enforcement. All affecting the poor more than they do the rich, and all unnecessary cuts: solely so that local Labour politicians can stay in office by appealing to swing voters while they dump on the disadvantaged."

For Cllr Jan Gavin to try and blame Labour's cut of the student waste collections upon us is rubbish.  If she lived anywhere near the University or Redlands (the ward she is meant to represent) she would know that student dominated roads have masses of extra waste at the end of the academic year.  There is absolutely no way the Lib Dems or my party would have sanctioned this cut; even if officers had proposed it as an option (which they didn't).

The Greens should shoulder their responsibility for this short-sighted and ill-judged cut, as it was they who ensured Labour got back into control of RBC last month by failing to support the Deputy Mayor, Cllr Jenny Rynn stepping up to be Mayor - as is customary.  This meant a Labour councillor was parachuted into the Mayor's seat to get the casting vote necessary (Labour's 22 + casting vote: versus Coalition's 22).  The Greens 'bravely' sat on their hands so Labour regained RBC.

Time will tell how many other cuts Labour will foist upon the public in order to deliver their rash, but nice-sounding, pre-election promises.
Posted by Isobel Ballsdon at Monday, June 06, 2011