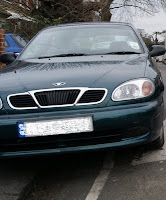 Residents rightly are annoyed when prevented from walking or wheeling along pavements by selfish pavement parking.  Whether wheelchair bound, partially sighted, pushing a buggy or simply holding someone’s hand, why should people be forced onto the road?
Over the last few months Labour campaigned against the previous administration’s plans to enforce a pavement-parking ban.  As you can see from the Coalition’s February Cabinet report, 2.1 states there’d be “exemptions of certain roads”. 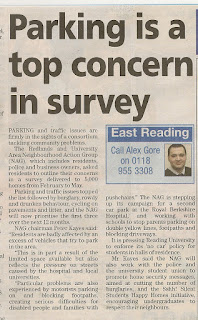 As evidenced by the Chronicle's article to the right, the Redlands/University area NAG's survey results name parking and traffic as residents' top concerns, as their chairman states:

"Particular problems are also experienced by motorists parking on and blocking footpaths, creating serious difficulties for disabled people and families with pushchairs."

As I said above, the Coalition was going to have exceptions – for roads too narrow for emergency vehicles or dustcarts to drive unless cars park partly on the kerb - so was Labour just opposing to be awkward?
How long will it take Labour to realise they shouldn't support illegal parking; and that sensible enforcement is what the electorate want?
Posted by Isobel Ballsdon at Thursday, June 09, 2011