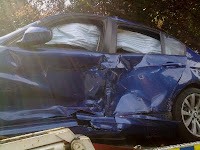 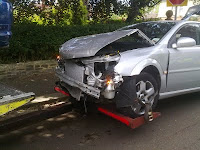 On Wednesday morning a BMW & Vauxhall were involved in a collision at the junction of Highmoor and Albert Road in Caversham Heights. I saw the aftermath and spoke with one of the Police. He said the people involved were okay.
As local residents will know, several accidents have happened at this junction. RBC officers made junction improvements a few years ago which reduced the accident rate substantially. However this didn't prevent Wednesday's accident - nor a similar one last year in which a Land Rover failed to stop at the junction, was hit by a car which caused the Land Rover to spin and crash into the boundary wall of the corner property.
I've asked for a meeting with officers, together with a local resident who is a civil engineer who specialises in traffic and highways, to see if any further improvements can be made.
Posted by Isobel Ballsdon at Friday, May 27, 2011