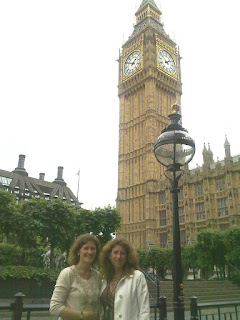 It was my first Prime Minister's Questions today.

I've been in the public gallery before, behind the glass protective screen, when my then Member of Parliament, Jane Griffiths, presented the Kings Meadow Campaign's petition of over 10,000 signatures.

The chairman of Reading East Conservatives, Alison Swaddle, had a spare ticket for today's PMQs and I leapt at the chance to attend!

We were seated over the Government so could only really see David Cameron and the opposition, unless we switched to watching the monitors.

The person with whom I was most struck was Ed Miliband. The features of his voice were far more pronounced than I'd noticed over the television or radio.

Afterwards we met up with our constituency MP, Rob Wilson, for a very civilised chat and cup of tea in the Pugin room.