With Labour's calling card for Church Ward, Labour has stooped to a new low. 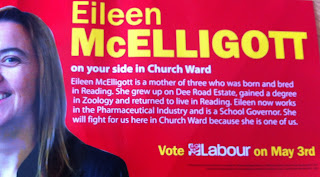 They state she "...was born and bred in Reading...She will fight for us here in Church Ward because she is one of us."

Unless you are aware that our Conservative candidate is Cllr Azam Janjua, you might not realise Labour's nasty game.  It is a racist attack - a 'dog whistle'.

It is worth knowing why Labour has done this:

In Church Ward (East Reading) the biggest issue is the hated traffic lights on Shinfield Road. Cllr Azam Janjua's re-election campaign states under a Conservative administration, if elected, we will put back the roundabouts: This contrasts with Labour's minority administration's policy that the traffic lights are here to stay.

Azam lives with his wife in the heart of Church Ward just off Whitley Wood Road. He's lived in Reading for nearly 50 years.  He's been a councillor for many years and since retiring from being a Hackney Carriage taxi driver he has been a full-time councillor.  He is well known in the whole community in Church Ward.  He has 3 daughters: the eldest is a local GP, the middle one is a GP in London; the youngest (who got a degree at Worcester College, Oxford University) is a researcher.

In contrast Labour's candidate lives in West Reading - Tilehurst to be precise.  She has no experience of local government.  She wasn't even born when Azam moved to Reading.

A Labour man who, when living in Reading was one of their councillors, has written a very interesting post on Labour's current Church Ward campaign which you can read here.  His post finishes:


"I am ashamed ever to have been involved with Reading Labour Party.  To have sunk so low as running a racist election campaign is the despicable act of some desperate men.  I know nothing about this candidate but I hope she loses as she deserves to.  This is sick."

Ask yourself why Labour thought it necessary to stoop so low

Update: A post on the background of the Labour men behind this racist dog whistle campaign is here.  Also you can read what my colleague Cllr Richard Willis has written
Posted by Isobel Ballsdon at Friday, April 06, 2012